Top States that purchase and sell the most wooden pallets Pallets, also called skids, are flat transport structures that support goods in a stable manner, whether lifted by a forklift, pallet jack, front loader, work saver, or other jacking device, or a crane. It is the pallet that provides the…
Read Article 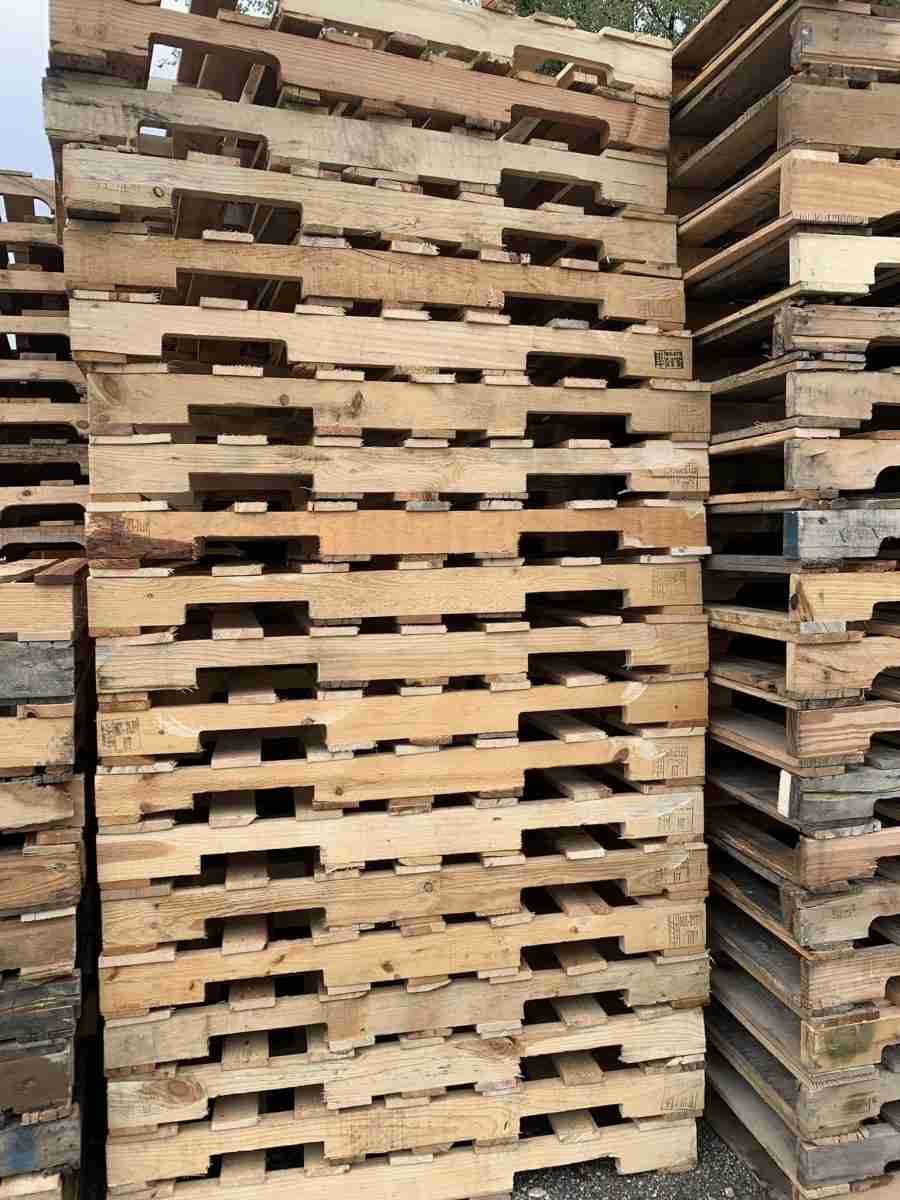 Top States that purchase and sell the most wooden pallets

Pallets, also called skids, are flat transport structures that support goods in a stable manner, whether lifted by a forklift, pallet jack, front loader, work saver, or other jacking device, or a crane. It is the pallet that provides the structural foundation for handling and storing unit loads efficiently. When shipping goods or shipping containers, pallets are often strapped, stretch wrapped, or shrink wrapped. It has dramatically replaced older forms of crating like wooden boxes and wooden barrels since it was invented in the 20th century, as it works well with modern packaging like cardboard boxes and intermodal containers. Pallets are usually made of wood. 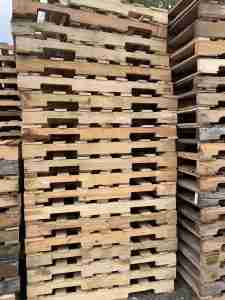 The largest producer of wood pallets is North America, with about 44% of the market, followed by Europe and Asia. Among the major manufacturers in this industry, Brambles has the largest marketshare, followed by Palletone, ReUsed USA, Pooling Partners, PGS, and Millwood.

In this Article we will go over the top states with the largest amount of pallets bought and sold.

If it may come as no surprise the california is the 1st on this list. It is the largest state in the country by population and therefor has a massive need for wooden pallets. The manufacturing sector in California employs over 1.5 million people, making it the nation’s largest manufacturing state. Tesla, Raytheon, Northrop Grumman, Lockheed Martin, and General Atomics are among the top companies in California’s electronics industry.

California’s electronics sector continues to grow, while its food processing and machinery sectors remain strong. It has an educated workforce and abundant capital. Silicon Valley, the epicenter of the tech boom, has contributed to the rapid growth of the Western economy. Boeing Company, Amazon, and Microsoft Corporation are among these technology companies.

More than 400 commodities are produced in California’s agricultural abundance. California grows more than a third of the country’s vegetables and three-quarters of its fruits and nuts. A standard pallet type for a company in the food packaging business is the 48 x 40 GMA pallet. It is important for these GMAs to be clean and free of contamination. For the 2021 , these are California’s top commodities produced :

CA also serves as one of the major ports for international trade between the United States and Asia, which includes American agricultural products and Asian manufactured goods.

What do all of these companies have in common? Upon receiving their wooden pallets, they all received their products. Due to the high demand for 48 x 40 pallets and the high cost of living, California has some of the highest wooden pallet costs in the country. With new 48″ x 40″s going for up to 25-30 dollars and used going for anywhere from $8-15.

For those looking to shop for wooden pallets in California it is home to many major pallet companies. Theseinclude The Cary Company, Kamps, 48 Forty, All Good Pallets, Used Pallet Recycling, and TransPak, 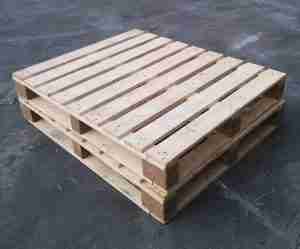 After California, Texas is the second largest wooden pallet buyers in the United States. With over 1.2 million workers in the manufacturing sector in TX Over a quarter of a million people are employed by companies in Houston’s manufacturing sector alone. Houston has evolved from being primarily an oil and gas city to a city that incorporates aerospace and aviation, digital technology, and biotechnology.

It comes as no surprise that the Lone Star State holds a top spot in wooden pallet purchasing. Manufacturing is a major industry in Texas, particularly in industrial machinery, fabricated metals, and food processing. Defense contractors such as Lockheed Martin and L3Harris are among the top manufacturing companies in Texas, as well as electronics giants such as Apple NXP Semiconductors. There are more manufacturing jobs in Houston than in any other city in the United States. 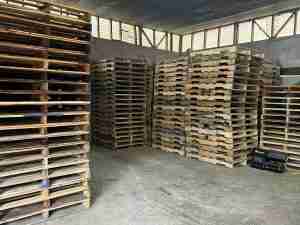 Manufacturing is a national tradition in Texas, where products are made today and tomorrow’s technologies are developed. Across a wide range of industry sectors, Texas’ strong manufacturing activity is evidence of the state’s incredibly diverse economy. Business-friendly laws, a skilled and growing labor force, and North America’s strategic location have all contributed to the state’s flourishing automotive manufacturing industry.

Additionally, Texas’ extensive network of higher-education institutions has created an ideal environment for high-tech manufacturing, such as electronic components and aerospace. Furthermore, the state is a leading producer of petroleum and chemicals due to its natural resources. The food manufacturing sector in Texas is robust because some of the country’s largest food and beverage companies have major operations here. Pallet Manufacturing is a pillar of the Lone Star State

A total of $5.2 billion will be exported by the Texas food manufacturing industry in 2020, ranking second in terms of establishments, employment, and exports. Frito-Lay, Dean Foods, Keurig Dr. Pepper Inc., and Continental Coca-Cola Southwest Beverages are some of the top food manufacturers and distributors with headquarters in Texas. A number of companies have expanded recently, including Tyson Foods, Great Lakes Cheese, Cacique, Kraft Heinz Food Company, and Interamerican Foods Corporation.

Texas manufactures some of the world’s most advanced products. Innovation and new technology are launched from the advanced manufacturing industry in the state. The state of Texas is home to some of the most innovative and large-scale manufacturing operations, including Ericsson’s 5G smart factory, Tesla’s Gigafactory and Samsung Electronics’ U.S. semiconductor fabrication facilities.

The standard wooden pallet prices in Texas are amoung the more afforadable in the country. New 48 x 40s can be bought for around $15 and Used anywhere from $6-$10 for Grade B(#2) and Grade A(#1).

For those looking to do business in Texas is home to many major pallet companies such as PalletOne, Austin Pallet, Kamps Dallas, Texas Pallet Company, Hernandez Pallets, and ReUsed USA  ATX.

Florida’s areas of strength include advanced manufacturing, including electronic components, aerospace and defense products, as well as metal fabrication. A wide variety of goods are manufactured in Florida every year, including batteries, boats, semiconductors, and satellites. More than 300k people work for more than 20k manufacturing companies in Florida, one of the nation’s top 10 manufacturing states.

With 9,7 million acres under cultivation, Florida’s 47,400 farms and ranches continue to produce safe, dependable food. These farms and ranches provide Florida with a large and stable economic base with citrus groves, nurseries, vegetables, cattle, and calves in various regions of the state.

The types of pallets used in Florida include New, Used, Grade A, Grade B, and Grade. Typically in 4-way or 2-way entry stringer and block. Dimensions range anywhere from the standard 48 x 40 GMA to custom sizes like 36″ x 36″

What is the common thread among all of these companies? Their products are all delivered on wooden pallets. Florida has some of the lowest wooden pallet costs in the country due to high supply of 48 x 40 pallets and low costs of living. A brand new 48″ x 40″ can cost up to 15 dollars, and a used one can cost up to $8. 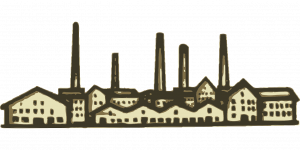 Across New York City, companies are leveraging technology to empower their workforces and improve their bottom lines, from traditional industries like design, fashion, and food manufacturing to emerging sectors such as bio-engineering and urban technology.

From 3D printing to robotic automation to augmented reality, New York City businesses are pioneering advanced manufacturing technologies. A powerful competitive advantage is given to manufacturers by these technologies, which allow them to customize products and bring goods to market more quickly than ever before.

There are many large manufacturing companies in New York, including Pfizer, IBM, Lockheed Martin, and L3 Harris Technologies. New York Pallet, ReUsed USA NYC, and Ongweoweh Corp are a few of the popular pallet companies in the city. 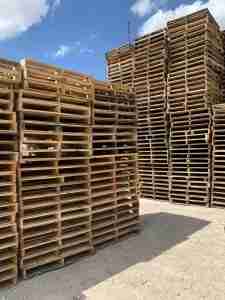 Pennsylvania is home to a large number of wooden pallet buyers and sellers across the state. This is mainly due to the state’s thriving food production and industrial manufacturing industries. A key component of Pennsylvania’s economy has always been manufacturing, and that is still the case today

Among the largest food-processing sectors in Pennsylvania, it is the leading state in shipments of fruit and vegetables, chocolate, and potato chips. With high employment concentrations in snack food manufacturing, Pennsylvania ranks first in dairy, produce, and livestock production. The state of Pennsylvania is a leading producer of processed foods. Manufacturing in the state is dominated by the production of processed foods

In PA, pallets are typically GMA 48 x 40, a pallet constructed according to Grocery Manufacturers Association guidelines.

A GMA pallet has:

Illinois has a thriving manufacturing industry making it one of the country’s largest wooden pallet buyers and sellers. Food products, chemicals, metal fabrications, computer and electronic products, rubber products, and printing and publishing establishments are among the top industries in Illinois.

As well as being ranked among the top states when it comes to food products, chemicals, fabricated metal products, computers and electronic products, and rubber products, Illinois also ranks high when it comes to printing and publishing establishments. A major share of its foreign exports is non-electrical machinery, which is also among the top producers. The Chicago metro area is home to the most industrial parks in the state.

The pallet industry in Illinois began to decline in the latter half of the 20th century, like many other states across the country. The relocation of companies overseas and to lower-cost states resulted in the loss of hundreds of thousands of factory jobs. Manufacturing, however, remains a major economic sector in the state.

In Illinois, there are a variety of pallet yards and recyclers. Calco Pallet Company, CHEP, ILLINOIS PALLET, and Used Pallet Recycling – Chicago are all included in this list 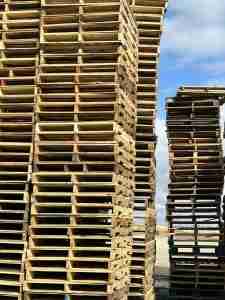 These industries require a variety of different pallet types including stringer and block. There is also a large variety of sizes used in Ohio, such as  48″ x 40, 48″ x 48″, and 42″ x 42″ Cincinnati is Ohio’s largest producer of manufacturing jobs, making it a trending hot spot for manufacturing jobs. The city as a whole has 1,113 manufacturing firms, including GE Aviation Systems, which employs about 6,500 people.

As a result of high demand, Ohio is home to a number of pallet recyclers and producers. Such as Hope Timber Pallet, 48 Forty Columbus, UPR Cleveland, and Tri County Pallet.

We will continue to see a growth in the pallet industry into 2023 and beyond. 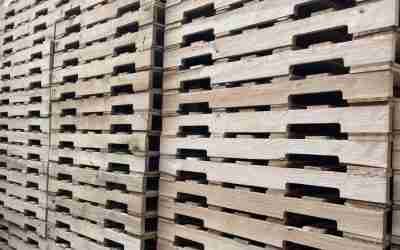 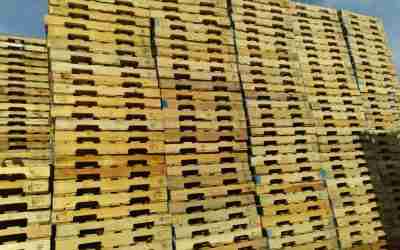 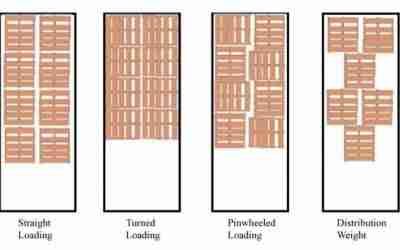 How to Load Pallets onto a Trailer?

How to Load Pallets Onto a Trailer Here are some tips on loading and unloading pallets from a truck. Consider Your Container In any cargo load, the goal is to fit as much product inside the trailer as possible without making the trailer overweight or causing the load...